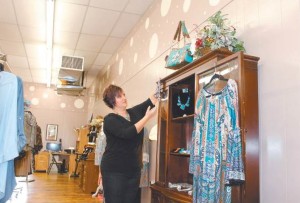 The Winchester Downtown Group has been striving to promote the city’s Square area to showcase business opportunities in a historical setting, and one of them — Pretty Discoveries — has proven to be a stellar attraction in the former Hammer’s building.

With a vision of owning her own boutique, Stephanie Ogle began selling jewelry through home parties and events throughout Tennessee.

In 2010, Ogle opened a storefront in downtown Fayetteville where she realized her dreams had come true.

Pretty Discoveries is open Monday through Friday 10:30 a.m. to 5:30 p.m. and Saturday from 10 a.m. to 4 p.m. In both locations, Ogle sells several lines of boutique clothing at reasonable prices.

She says she hand-selects every item in both stores.

Pretty Discoveries sells anything from one-of-a-kind unique pieces of jewelry to fashionable handbags and scarves.

“We carry flip-flops and sandals for spring and summer,” Ogle said, referring to how the business changes its stock with the seasons.

“We also carry a selection of boots for fall and winter,” Ogle said.

“I have business parties and events for many companies either for their employees or for their customers,” she said.