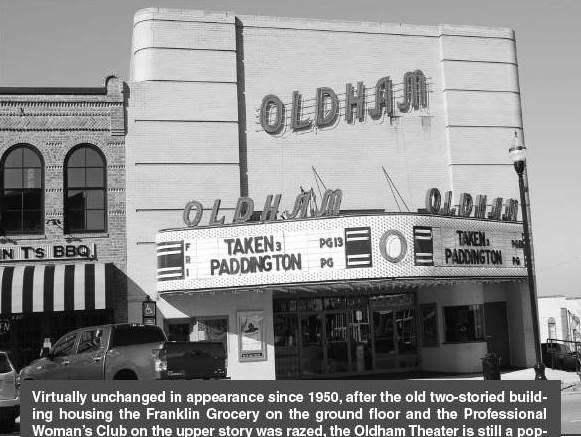 Virtually unchanged in appearance since 1950, after the old two-storied building housing the Franklin Grocery on the ground floor and the Professional Woman’s Club on the upper story was razed, the Oldham Theater is still a popular entertainment venue for local residents of all ages.

Art Deco architecture that dominated many of the prominent buildings in Winchester, including the courthouse during the 1930s, was followed in 1950 by the Moderne Art style with the construction of the Oldham Theater on the north side of the square in the spot once occupied by the H. B. Franklin Grocery.

Before what came to be named the Oldham Theater could be completed, George Oldham passed away in September 1949. It is interesting to know that construction took much longer than expected because Mr. Oldham thought the contractors were charging too much for the brick. Construction stopped until the brick prices came down.

When the theater opened for the first time in 1950, it bore the name of Oldham Theater in honor of George E. Oldham.

On Thursday evening, Sept. 14, 1950, the “new” Oldham Theater opened for the first time, according to the manager, Ernest Martin. The opening attraction was “And Baby Makes Three,” starring Robert Young and Barbara Hale. Gene Webb of McMinnville played the Hammond Organ with a half hour concert prior to the showing of the main feature on opening night.

Because the theater was built during the Cold War when the nation was seized by the fear of nuclear war, the building was constructed to be used as a fallout shelter if needed.

Bottled water and other supplies originally stored in case they were needed for a shelter were found in the basement by the Swaffords, who were the owners in 1993.

Constructed during racial segregation, the theater had separate entrances for blacks and whites and included a balcony where the blacks used to sit. At the time, the theater could still seat up to 696 people, its original top capacity. The Oldham has a second screen located in the former balcony.

Another historic milestone involved the impact of the Civil Rights movement at its peak during the 1960s when local social justice advocates successfully applied legal pressure to desegregate the Franklin County public school system and many area businesses followed suit, including the Oldham Theatre. 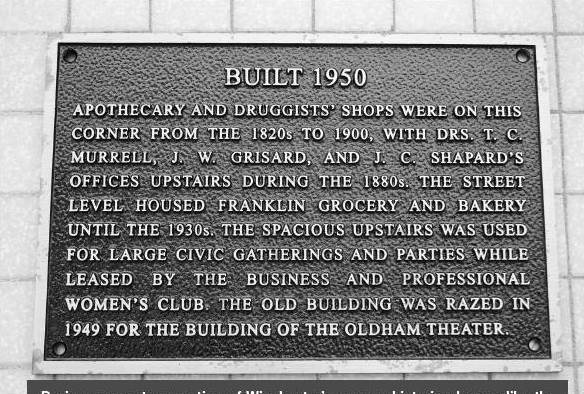 During a recent renovation of Winchester’s square, historic plaques like the one pictured were strategically placed to provide a brief historical summary of the buildings and businesses around the courthouse and streets near the center of Winchester.

In 1994, a ribbon-cutting ceremony marked the reopening of the Oldham under the new ownership of Rhonda Acklen.

In 2009, the downtown area of Winchester also underwent a major renovation and the Oldham followed suit.

In July 2000, Rhonda Acklen sold the Oldham to Ray and Beth Ann Rhoton.

The Rhotons also own the Montana Drive-In, located in Estill Springs.

During the Oldham building’s 65 years in existence, it also housed two small businesses, The Kiddie Shop and Diamond Jewelry.

The source of information for the Oldham Theatre came from excerpts from “Around the Square: A Business History of Winchester, Tennessee 1809 – 2009.”

The soft-bound version of this book can be purchased for $30. A smaller book, titled “Tour Guide to Winchester Historic Homes, Buildings & Sites” is $3 and both are available at City Hall. Both books were compiled and published by the Winchester Historic Preservation Committee.